If There is No Message, What are We Doing in the Theatre? – Paul Ugbede

Nigerian Playwright, Paul Ugbede is one of those people behind the scenes. Over his life, he has shared his stories in the form of books and stage plays.

by Franklin Ugobude
in People
0
Share on FacebookShare on TwitterWhatsapp

They may not get the final bow with the cast, but behind every production is a writer who has thought of and conceptualised the idea that the audience enjoys. Their stories travel a long way – going home with the audience and sometimes on tour to new people and new cities. Nigerian Playwright, Paul Ugbede is one of those people behind the scenes. Over the past few years, he has shared his stories in the form of books and stage plays.

With the likes of Fela and the Kalakuta Queens, August Meeting, Legends and a host of others in his portfolio, Paul is building a career writing some of the most critically acclaimed plays of today. We got an afternoon with him earlier this year to learn more about him and his work.

For Paul, childhood was quiet and fun and not entirely different from that of many other Nigerian kids. He grew up under a very strict and tensed atmosphere with a disciplinarian father whose presence was enough to make you read a book upside down. Him and his brothers – one younger and another older, were denied the right to proper expression as they couldn’t go out of the house to either play with other kids or just engage with the surrounding.

According to him, the fear of his father flogging him made them remove themselves from external activities. This would contribute to his introverted behaviour for a while. He recounts, that sometimes when he had fights with people and was told to tell his version of the story, he would end up bursting into tears, not for lack of words but more or less for the inability to describe them. In other words, he was a bumblebee – so full of what to say but no way to say it.

In primary school, he embraced the art of drawing all thanks to his brother. This simple act that started on the sand and morphosed into paper would not only help his artistic skills, but would go on to help him express more. He went on to make comics something that created a wide fan base for him ranging from children who queued enthusiastically to read, and adults whose homes he took the comics. As expected, his father didn’t like it and he destroyed the books.

This, however, did not deter Paul who was in Primary Six at that time and with the help of his brothers designed an art form called kpombo kpombo. Kpombo kpombo was the art of creatinghuman figures and other items from wires. They created cars, buildings and could be likened to puppet theatre where someone stood and narrated, and another brought the characters to life.

In SS1, he got into the sciences because his father had wanted him to become a medical doctor. He also had the notion that anybody in the sciences was intelligent, and their mates in the arts were dullards. All the Physics did not censor his creative mind. He wrote his first fiction story, When There’s Life while at St Charles College, Ankpa. He presented it to his literature teacher and Vice-Principal (Academic), Mr Francis Odinya. He was ready to get it published, but Mr Odinya read it and said, “You have a gift…allow it to flower”. “I cried that day” Paul later wrote in a poem in which he announced the FOLA, Francis Odiniya Literally Award in honour of his teacher earlier this year.  In SS3, he went back to Mr Odinya with a detective story which he edited.

When he was older, he moved on to the University of Jos where he studied Theatre Arts and Mass Communication. He wrote a full-length play for a playwriting class he was in. This play attracted a ‘see me’ note from the lecturer, Mr Lateef Paul which terrified Paul. The said lecturer would then tell him that he had a flair for writing, and he should never stop writing. And he has not stopped.

He may have started receiving national recognition only a few years ago, but it is safe to say that Paul Ugbede’s career as a writer had kicked off even before he realized it. While still in school, his play, Our People Shall Die No More! was directed by his lecturer, Ernest Agoba and performed by his class and his first comedy, Trading Places has been performed at the command performance for a University of Jos convocation.

In 2016, with Our Son the Minister, he won a million naira in the inaugural Beeta Play Competition, a playwriting competition hosted to promote the arts in Nigeria. He had just moved to Lagos, a move he cites as one of the best decisions he has made in life despite hating the city. Our Son the Minister deals with the current state of Nigeria’s democracy and the convoluted intrigues and shenanigans. For him, it was a major turning point in his career. The win and the play put him in the spotlight. It has since been published and is widely read around schools in Nigeria and performed by different Universities around the country making it his most publicized and performed play.

On the role of Theatre, Paul is strong believer in the power of Theatre to create change in the society. He equates it to a traffic warden that gives us directions and argues that we can’t leave that responsibility to scientists alone. Elaborating of this purpose, he asks, “If there is no there no message, then what are we doing in the theatre?” Our Son the Minister, for example is a political satire that tells the story of a successful medical practitioner who turns down a ministerial appointment because he doesn’t feel like he’ll be able to serve the country honestly while surrounded by immediate and distant family who see his appointment as their chance to feast on gold and kiss poverty goodbye. Doing Theatre is a conscious act of trying to effect change. “If my play cannot right a wrong, then I don’t have any business writing.” Paul confidently says.

See also: My Ability to Dance and Sing has Played a Big Role in My Career – Dalma

Besides writing, he had acted in the university playing major roles between his 100 level days and 400 level days. He also directed a few projects and hopes to do it in the future. Besides that, he hopes to go into comics as well, learning from someone and getting trained. He hopes that some of his children’s books are turned into the world of animation.

Paul Ugbede currently boasts of popular plays and musicals like Rancoteur Production’s August Meeting, Gula, Terra Kulture produced, Queen Moremi, the Musical, Mr Chairman Sir!, Ayodeji Ajayi’s Legend as well as Dialling Love and A Slice of Good Things which showed at the Lagos Theatre Festival in 2016 and 2017 respectively, and many more.

Some of the people he looks up to include seasoned writers and playwrights both local and international for a wide range of reasons. When it comes to language, it is Nobel laureate, Wole Soyinka, when radicalism and styling are at the centre of the conversation, it is Femi Osofisan and Harold Pinter.

From us here, we can only wish him the best! 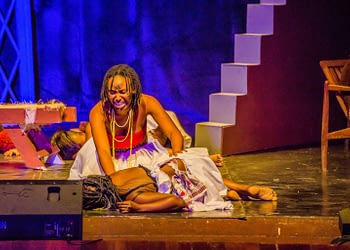 Silent Voices Uganda Call for Theatre Directors Apprenticeship 2020 is Out