by Lumumba Mthembu
in Reviews
0
Share on FacebookShare on TwitterWhatsapp

Inspired by a Facebook video engaging with “school children negotiating gang violence on the Cape Flats” according writer and director, Gavin Matthys. Matthys’ treatment of the subject queries his experiences as a khullid/colourd person, as they are informed by differences and parallels in geography.

At call time, the stage manager Olwethu Simelane materialises at the box office to herd the crowd to the outdoor performance area. Colourful anecdotes regarding tech tests and weather reports illuminate the short, dark walk. A construction crane visible over the Wits walls sways in the dusk breeze. Drizzle spits obliquely on us. It is raining not far from here. On location, darkly clad wranglers ensure that we stand in position to see the performers emerge, before sitting on the cushions laid out on the ledges facing the side of a well-lit building.

Drums boom from behind us, accompanying video footage of elands, herdsmen and hunter-gatherers projected onto a wall to the right of the stage area. Their daily lives unfurl in the pristine Savannah unmolested by the colonial encounter, until a ship is sighted approaching the shore. The first inhabitants joke about the strange appearance of the vessel and its pink passengers until a gunshot kills their mirth and unleashes war. Cattle is traded back and forth as disputes break out over settled territories versus traditional hunting and grazing grounds. Trade devolves into theft and land claims escalate into the first skirmishes of the Khoikhoi-Dutch Wars.

The cultural erasure following Dutch victory is brutally depicted in an indoctrination scene, in which the cast of five is whipped while reciting verses from the bible. To indicate the completion of their religious conversion, the performers strap the bibles to their heads like helmets. Repetitious instruction castrates their minds, resulting in a complete loss of agency. Bereft of culture, the vanquished wander the stage like zombies in a sad sequence of robotic choreography.

This is broken up by a wild explosion of dance to mark the Tweede Nuwe Jaar, the slaves’ day off on the 2nd of January, which they were permitted to celebrate as they pleased. After the abolition of slavery in the Cape in 1834, the annual celebration morphed into the Coon Carnival – a name that was later withdrawn by local authorities due to its offensive connotations.

Apartheid ushered in an era of disruption to the Cape Carnival, which splintered in location as well as organisation. The Group Areas Act and its forced removals broke communities up and established the Cape Flats. This spatial violence is represented in the play by the sound of sirens and helicopters projecting from the speakers. The jollity is cut and the dancers freeze before they are neatly organised into a queue to receive their apartheid fortunes.

A lottery wheel spins on the wall from the projector, deciding the fates of all who stand beneath it. Some are assigned to middling lives while those who draw the short straw are forced to eke out a living in a society where violence is currency. Bodies represented by effigies hanging from the balconies of the building pile up, symbolising the youth lost to the gangsterism of the Cape Flats. “The land is yours,” the performers concede to the descendants of the Dutch, “but the blood that flows over it is ours.”

“Embodied trauma is historically situated and passed down from generation to generation” the director notes. And Ground Zero //O (or to die) attempts to point at this trauma. In the show “Loss becomes the locus where religion, violence, and heritage collide.” Matthys explains in the production program. The beneficiaries of plunder do not have the luxury of stating, “Ek sal nie jammer se nie.” Their inheritance is to reckon with the ill-gotten privilege won by the evil deeds of their predecessors, just as the descendants of the displaced have to negotiate shame and destitution daily.

For Gavin Matthys Ground Zero //O (or to die) “poses no solutions but encourages communal reflection and personal introspection.” Where do you situate your right to belong to this land? If your ancestors came from the sea, have you reconciled “your right” to this land with its violent theft from beneath the feet of its first inhabitants? And if your forebears were dispossessed, can you say you belong to a land you no longer own?

Ground Zero //O (or to die) written and directed by Gavin Matthys and designed by Nqobile Ngomane and Reatlilwe Maroga was presented by Wits Theatre on behalf of The Wits School of Arts from 26 to 29 October 2022. 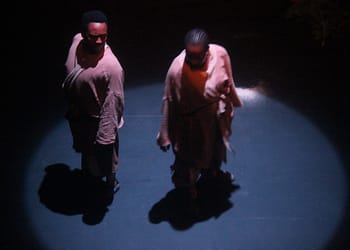